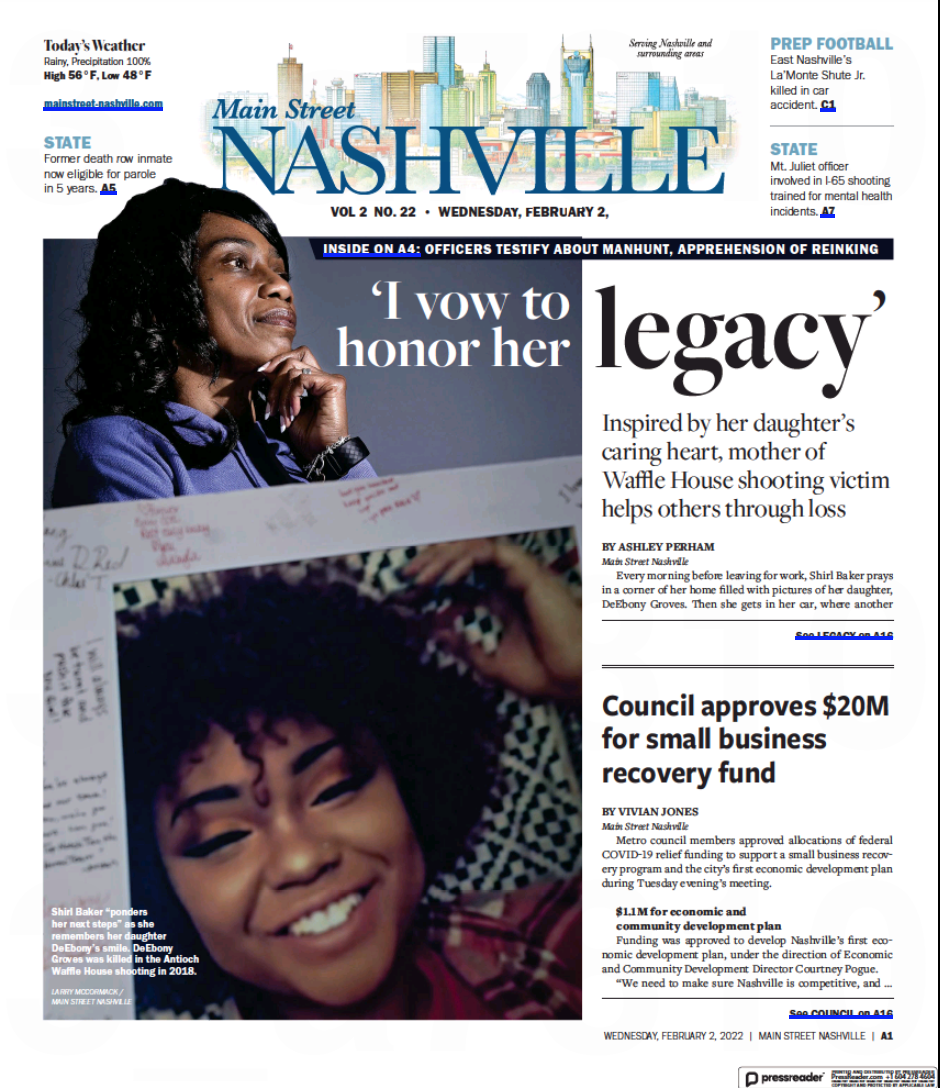 I vow to honor her legacy

Every morning before leaving for work, Shirl Baker prays in a corner of her home filled with pictures of her daughter, DeEbony Groves. Then she gets in her car, where another picture of a beaming Groves is buckled in the front seat.

As she drives, Baker talks to her daughter about her day and lets her know how the DeEbony Groves Foundation is doing.

Groves was one of four people killed on April 22, 2018, in the Antioch Waffle House shooting.

Groves was 21 and a senior at Belmont University, where she was studying social work. Baker said Groves hoped to use her degree to help children.https://26d2319cacc77adc1803c77e188040c8.safeframe.googlesyndication.com/safeframe/1-0-38/html/container.html

Groves loved kids. She taught children at her church, where she also sang in the choir. In the summer, she worked at the Gallatin Civic Center.

Groves graduated in 2014 from Gallatin High School, where she was the captain of the varsity basketball team.

At Belmont, she worked in her residence hall and was a member of the Delta Sigma Theta sorority. She also held down two off-campus jobs at Pier 1 and Panera Bread.

She was funny, outgoing, spontaneous and the life of the party, Baker said.

“I always told her she had a million-dollar smile,” Baker said.

Groves loved to laugh, and she and her brother would quote comedian Rickey Smiley constantly on road trips.

Baker said she would worry about Groves because she was the baby of the family.

“When you’re trying to train your kids to do right … sometimes you don’t know if they get it,” she said.

But Baker said that at a vigil the day after the shooting, Baker knew she got it.

At the vigil, Groves’ friends came up to her and told her how she had encouraged them.

She gave one friend relationship advice. She encouraged another friend whose parents were going through a divorce. She told another one where he could find a job.

Baker said Groves would regularly call her and say “Mama, pray for so-and-so.”

“She got it. She got the concept because she was able to encourage and help other people,” Baker said.

Groves was extremely close to her brother. They were like twins, Baker said, even though he was 10 years older than Groves. They worked at Pier 1 together and were supposed to graduate together from Belmont in May 2018.https://26d2319cacc77adc1803c77e188040c8.safeframe.googlesyndication.com/safeframe/1-0-38/html/container.html

In fact, it was because of her brother’s great experience attending Belmont that Groves decided to go there.

Instead, it was Baker who walked across the stage to get Groves’ diploma.

Baker knew she wanted to do something to honor her daughter’s legacy, but she really didn’t know what or how.

In 2019, Baker visited the Trayvon Martin Foundation retreat in Florida. The foundation provides emotional and financial support to families who have lost a child to gun violence. It’s named for the 17-year-old who was fatally shot in 2012.

Baker came home and knew she wanted to give a similar opportunity to other mothers.

Within a week, she had a name, mission, logo and 12 board members for the DeEbony Groves Foundation.

Last April, the DeEbony Groves Foundation hosted its first weekend retreat for mothers who have lost a child through an overdose, gun violence, car wreck or any other tragedy.

“After a death, some families are left alone in a dark place trying to figure out a way to resume life,” Baker said.

Baker said that when mothers are dealing with tragedy, sometimes they feel the need to explain when they have emotional moments. But in this group, the mothers don’t have to explain, Baker said.

About 20 mothers attended. Throughout the weekend they participated in empowering events such as walking a red carpet with a picture of their child, participating in a crowning event and hearing from other mothers who had lost children.

“I know personally it will not fix it, but it will give you a weekend of a little peace,” Baker said.

Baker said she closed out the weekend by tying the mothers together on a rope.

She told them that they were connected now. If one woke up having a bad day, they could pull on the rope and find support in the other mothers.

“We’re now in a club that we didn’t ask to be in,” she told them. “There was no vote taken. There was no application filled out. But now we have to support each other along this journey.”

Baker said she has had amazing support from her network of co-workers, church friends and family.

“People don’t have that, and I thank God every single day for the friendship and for the support that I have received.”

This year, Baker doesn’t know if she will be able to do a retreat, but she is planning to host something for mothers. She has also been trying to host a Father’s Day event. Groves was born on Father’s Day in 1996.

Baker is attending the trial of Travis Reinking, the Waffle House shooting suspect.

She said she has no expectations for the trial.

“I just know that at the end of all this, my scenario is still going to be the same, and do I want to be angry, bitter? No,” she said.

“In spite of what I’m going through and what I’ve been through, I vow to honor her legacy to the best of my ability,” Baker continued.